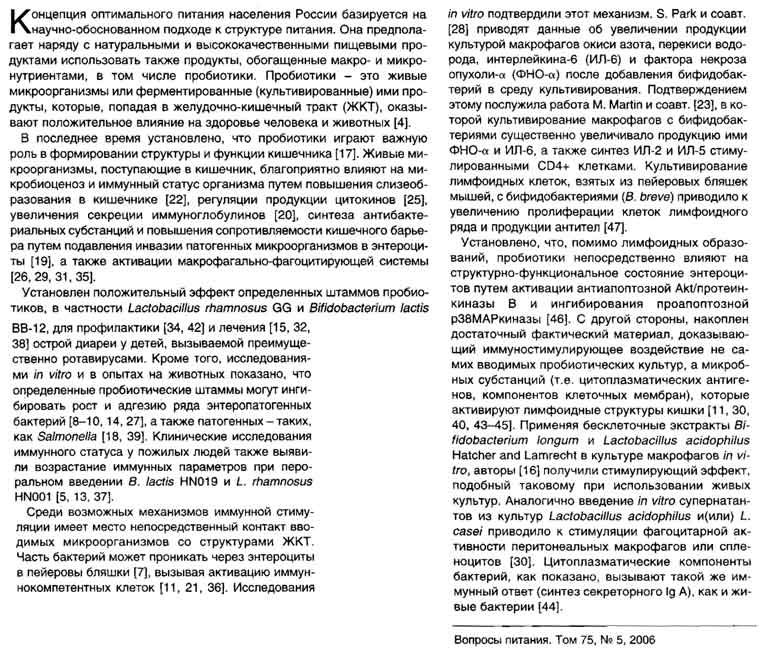 Concept of optimal nutrition of the Russian population is based on a scientifically proven approach to the nutrition structure. This structure assumes utilization of also products, enriched with micro- and macronutrients, including probiotics, in addition to the natural and high quality food products. Probiotics are live microorganisms or products cultivated by those, which positively influence the health of humans and animals, when getting into the gastrointestinal tract (GIT) [4].

It was determined recently that probiotics play a significant role in the formation of the intestine’s structure and function [17]. Live microorganisms, entering the intestine,  positively influence microbiocenosis and immune state of the organism through increasing the slime-forming in the intestine [22], cytokine production regulation [25], increasing immunoglobulin secretion [20], antibacterial substances synthesis and increasing the resistance of the intestinal barrier through inhibition of the invasion into enterocytes by the pathogen microorganisms [19], as well as activation of macrophage phagocytic system [26,29,31,35].

A positive influence of certain strains of probiotics was established, in particular Lactobacillius rhamnosus GG and Bifidobacterium lactis BB-12, for preventive care [34, 42] and healing  [15, 32, 38] of an acute diarrhea in children, which is mainly caused by rotaviruses. Besides that the in vitro research and experiments on animals have shown that certain probiotic strains can inhibit growth and conglutination of the number of enteropathogenic bacteria [8-10, 14, 27], as well as pathogenic, such as Salmonella [18, 39]. Clinical research of the immune state of seniors also has revealed the increase of the immune characteristics with the oral administration of B. lactis and L. rhamnosus HN001 [5, 13, 37].

The direct contact of the administered microorganisms with the structures GIT finds place among possible mechanisms of the immune stimulation. Part of the bacteria might penetrate through enterocytes into the Peyer's glands [7], which causes activation of the immune competent cells [11, 21, 36].  The in vitro research confirmed this mechanism. S. Park and co-authors [28] provide data about production increase of the nitrogen oxide, hydrogen peroxide, B-cell stimulatory factor 2 and the tumor necrosis factor-a by the macrophage cultures after the addition of the bifidobacteria into the cultivation environment. It was confirmed in the work of M.Martin and co-authors [23], in which cultivation of macrophages with bifidobacteria significantly increased the production of the tumor necrosis factor-a and the B-cell stimulatory factor 2, as well as synthesis of interleukin 2 and interleukin 5 by the cells, stimulated with CD4+. Cultivation of the lymphocytes, extracted from Peyer's glands of mice, with bifidobacteria (B. breve) led to the proliferation increase of cells of the lymphocyte series and to the production of the antibodies [47].

It is determined that besides the lymphadenoids, probiotics influence directly the structure-functional state of the enterocytes through activation of the anti-apoptotic Akt/protein kinase B and the inhibition of the proapoptotic p38 MAP kinase [46]. On the other hand, enough factual information is collected, proving the immune-stimulating impact of not the actual applied probiotic cultures, but microbial substances (i.e. cytoplasmic antigens, components of the cell membranes), which activate lymphoid structures of the intestine [11, 30, 40, 43-45]. While using in vitro cell-free extracts Bifidobacterium longum and Lactobacillus acidophilus, Hatcher and Lambrecht in the macrophage culture, authors [16] achieved the stimulating effect, similar to the one, achieved while using live cultures. Likewise administration of supenatants from cultures Lactobacillus acidophilus and/or L. casei in vitro led to stimulation of phagocytic activity of the peritoneal macrophages or splenocytes [30]. Cytoplasmic components of bacteria, as it was shown, cause the same immune response (synthesis of the secretory IgA), as the live bacteria [44].
__________________________________
Questions of Nutrition, Vol. 75, No.  5, 2006