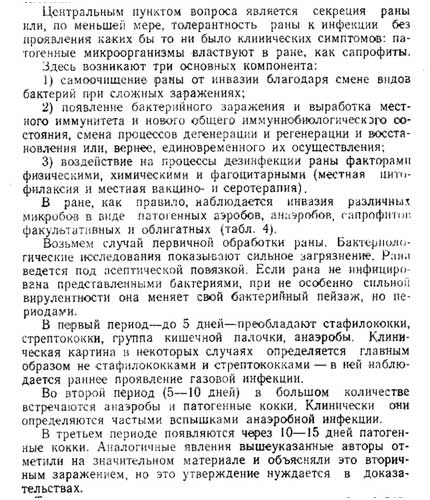 The central point of this question is the wound secretion or at least the tolerance of the wound to an infection without showing any clinical symptoms: pathogenic microorganisms rule in the wound, like saprophytes.
Three fundamental components appear here:     Many various microbes can be found in the wound, i.e. pathogenic aerobes, anaerobic organisms, saprophytes (facultative and strict) – Table 4.
Let us discuss the case of primary management of the wound. Bacteriological researches show very strong contamination. The wound is under aseptic dressing. If the wound is not infected by the presented bacteria, it periodically changes its microflora, assuming that the virulence is not very strong.
In the first period – up to 5 days – staphylococci are prevalent, as well as streptococci, a group of ETEC, anaerobic organisms. In some cases the clinical picture is not determined mainly by staphylococci and streptococci, but an early evidence of the gaseous infection is observed.
In the second period (5-10 days) anaerobes and pathogenic cocci can be found in great quantities. Clinically they are determined by the frequent anaerobic infection episodes.
In the third period pathogen cocci appear after 10-15 days. Mentioned above authors described similar occurrences and explained them through the secondary infection, but this statement needs to be substantiated.